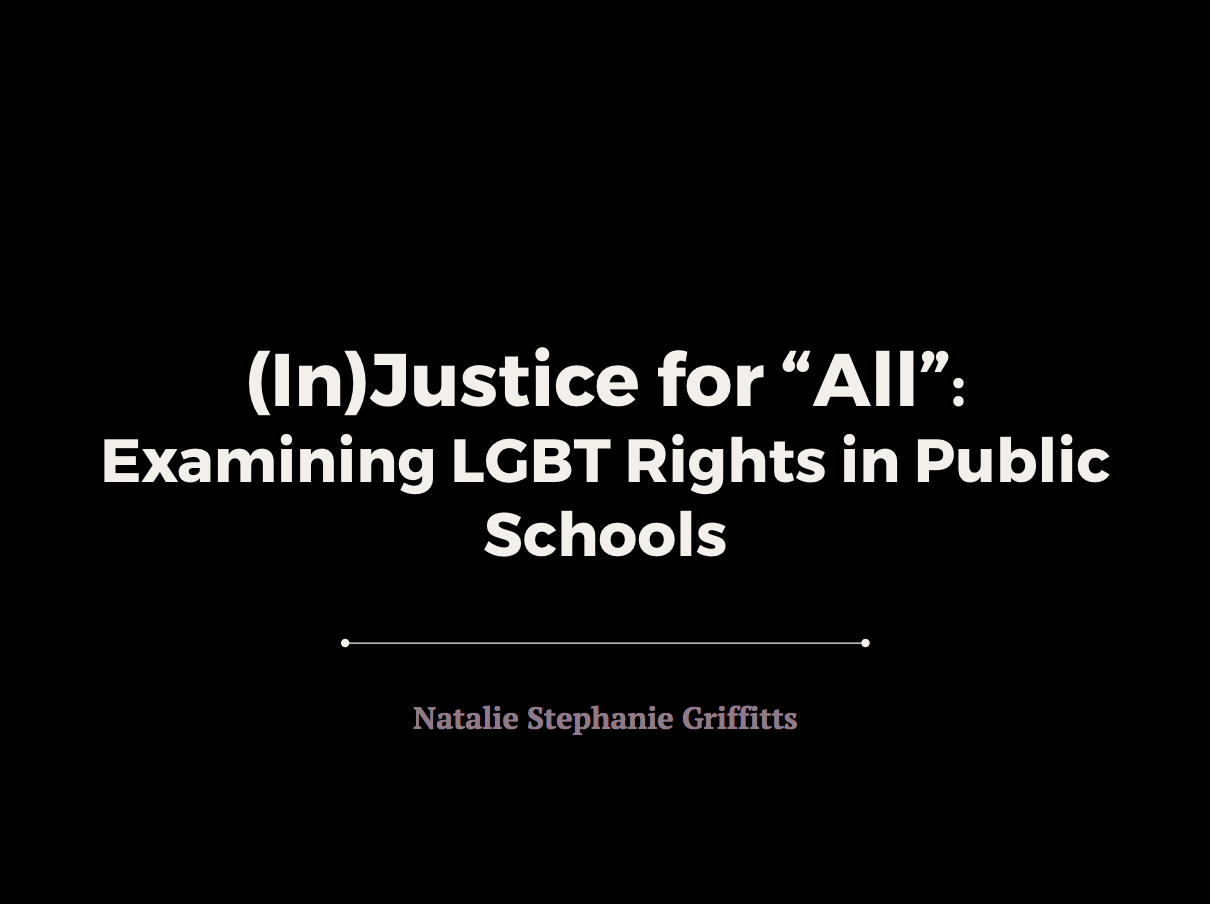 This research paper surveys the climate of the U.S. public school system toward the Lesbian, Gay, Bisexual, Transgender, etc. (LGBT) community. The survey intended to answer several research questions including: Is there evidence of LGBT discrimination in public schools? Are there founded cases of LGBT teacher or student discrimination? Are there laws in place to protect LGBT teacher or student rights? What are the differences between LGBT teacher rights and LGBT student rights? Through analyses of existing and open litigation, a framework of the history of LGBT teacher and student rights was established. These laws, supplemented with scholarly research, presented a clear argument that LGBT protections remain weak for both students and teachers.

As gender non-conforming identities receive publicity and sexual orientations diverge from the binary teachers and students will be face-to-face with questions and prejudice. How teachers and students respond to the non-traditional relationships of their peers or their non-conforming identities is now a matter of contention between conservative and liberal viewpoints. This conflict has resulted in issues of a balance of interests when a conservative area has reprimanded a person for their personal lifestyles, arguing that their sexual orientation or gender identity have disrupted the school’s environment. Upon examining court cases and scholarly research of the United States pubic school climate toward the LGBT community, there is significant evidence to support a clear disparity between the rights of LGBT teachers and students as well as LGBT persons and the heterosexual cisgender population.

The majority of court cases related to LGBT rights have not been focused on teachers or students. These cases can fit into two categories: worker’s rights and student rights. Moreover, the majority of the litigation has occurred at various state levels with only a handful reaching the Supreme Court of the United States. Therefore, there is a lack of consistency between states in regards to LGBT teacher and student rights. However, recent scholarly research shows consistency on how the LGBT community currently treated in public schools and how school policy changed that benefit the LGBT community impact the school divisions.

Initially, early court cases regarding LGBT workers revoked their rights. For example, in Board of Education of Oklahoma City v. National Gay Taskforce (1985), the courts upheld that teachers could be fired for public displays homosexuality that disrupted the workplace (“Board of Ed. of Oklahoma City v. National Gay Task Force,” n.d.). A decade later with Romer v. Evans (1996), the Supreme Court declared Colorado’s second amendment unconstitutional for trying to label LGBT rights as “special” because such a label resulted in easier discrimination against LGBT workers (“Romer v. Evans,” n.d.). Shortly thereafter, the keystone case of Weaver v Nebo School District (1998), in which a teacher had informed an inquiring student that she was a lesbian and was subsequently denied the right to speak of her homosexuality due to the school alleging such a discussion was disrupting the workplace, was heard by the U.S. District Court of Utah (“Weaver v. Nebo School District,” n.d.). The court decided that the Nebo School District could not force Weaver to sign a gag order based on her orientation when other teachers of other orientations were not silenced as well because this “not only violated the First Amendment, but also the Fourteenth Amendment’s Equal Protection Clause” (“Weaver v. Nebo School District,” n.d.). A teacher’s right to privacy was further supported during Lawrence v. Texas (2003) when the Supreme Court overturned Bowers v. Hardwick (1986) and, then on, protected marital and familial rights and the private conduct thereof from investigation (“Lawrence v. Texas,” n.d.; “Bowers v. Hardwick,” n.d.). In short, teachers are entitled to the privacy of their LGBT lifestyles but legally cannot be reprimanded for discussing that lifestyle if the context is not reprehensible for heterosexual and cisgender employees. Unfortunately, LGBT student rights are far less expansive.

LGBT progress for students has been far less progressive than teachers’ rights. A student’s rights to be out have also been discussed in the courts but not to the same extent as teacher rights. There are essentially three categories of student rights for the existing litigation on being out. First, the right for LGBT students to participate in public school activities with their partners. Second, their rights to equal protection from bullying. Third, the right for LGBT students and allies to create clubs that meet on public school grounds. Aaron Fricke v. Richard B. Lynch (1980), decided that students could bring same-sex students to school dances (“Fricke v. Lynch,” n.d.). However, this has remained a contested issue due to this being a lower court decision. For example, McMillen v. Itawamba County School District et al. (2010) was settled and the student was issued compensatory damages to McMillen and the school adopted a sexual orientation non-discrimination policy because McMillen had been denied tickets to prom because she wanted to take her girlfriend (“McMillen v. Itawamba County School District,” n.d.). In both Nabozny v. Podlesny (1996) and Henkle v. Gregory (2001) students were bullied for being out and the former ruled teachers were accountable for addressing LGBT bullying while the latter protected students from teacher discrimination against LGBT students (Lugg, 2017; “Henkle v. Gregory,” n.d.). Gillman v. Holmes County School District (2008) would be the primary case to allow students to express pro-LGBT opinions at school under the First Amendment (“Gillman v. Holmes County School District,” 2009). With increased exposure to non-heterosexual orientations through the media in the twenty-first century, there has also been an increase in favorable outcomes to litigation for the LGBT community. However, progress for transgendered workers and students of the LGBT community is still largely unseen.

Transgender rights for teachers and students revolve around their ability to be out. A key aspect of an emotionally and mentally healthy lifestyle for a transgendered person is social acceptance. This is not simply a matter of the validity of their transgendered identity, which would include the right to use facilities that align with their gender identity, but being able to pass as that gender in society, which includes both in dress and access to medication and medical treatment for transitioning. Transgendered workers have seen two recent major victories in Schroer v. Library of Congress (2009) and Glenn v. Brumby (2011). The first ruled that a person could not be fired for transitioning and the latter ruled that a person could not be fired for being out as transgendered (“Schroer v. Library of Congress, 2009; “Glenn v. Brumby,” n.d.). Nevertheless, transgendered student rights have not seen such progress. Presently, there has been no Supreme Court ruling setting a national standard that transgendered students may use the restrooms that coincided with their gender identity. Therefore, while the Fourth Circuit Court of Appeals is must reexamine G.G. v. Gloucester County School Board due to changes in both the Department of Education and the Department of Justice, students in Maine may have won this right under Maine’s High Court decision in John Doe et al. v. Regional School Unit 26 (2014) (“G.G. v. Gloucester County School Board,” 2017; “Doe v. Clenchy,” n.d.). Studies have shown that this lack of acceptance impacts mental health and safety in our public schools.

Scholarly research on LGBT teachers and students has been almost entirely focused on their experiences in the schools. These studies focus on acceptance and present evidence that supports the argument that anti-discrimination policies create a safer and more effective learning environment. Understanding Homophobic Behavior and Its Implications for Policy and Practice studied the students targeted by homophobia, underlying causes, questioned if homophobic-types of bullying were merely a facet of traditional bullying, and, ultimately, argued that the most successful means of curbing the harassment was a schoolwide anti-bullying policy and programs to create a community for LGBT youth, such as the Gay-Straight Alliance (GSA) (Poteat & Russell, 2013). Are school policies focused on sexual orientation and gender identity associated with less bullying? Teachers’ perspectives focused on these “SOGI” policies too and came to the same conclusions, while incorporating statistics to models, and added that it is also imperative for teachers to be willing to identify LGBT discrimination in their classrooms (Russell, Day, Ioverno, & Toomey, 2016). Just a year prior a study concluded that LGBT youth were statistically much more likely to be cyberbullying and came the conclusions that there are direct correlations between the rates of in-school bullying to cyberbullying and that cyberbullied students are unlikely to seek help at school (Schneider, O’Donnell, & Smith, 2015). Overall, this research and the legal progression of LGBT rights creates a clear case for what the future of LGBT teacher and student rights and responsibilities should be.

At the moment, teachers are responsible for protecting their students from speech and expression that could cause emotional or physical harm (McCarthy, Cambron-McCabe, & Eckes, 2014, pp. 106-107). Moreover, Title IX and the Department of Education’s Revised Sexual Harassment Guidance protects students and teachers from gender-based harassment and discrimination (McCarthy, Cambron-McCabe, & Eckes, 2014, p. 162). However, McCarthy, Cambron-McCabe, & Eckes (2014) elaborated that the laws of the land, particularly those of Title VII, are failing to protect the transgendered community (p. 330). Upon reflecting on these inconsistencies and the lack of federal intervention in the rights of the LGBT community there remain drastic differences from state to state regarding not only the treatment of LGBT teachers and students but what is expected of the teachers and students in terms of addressing problematic situations. Given the current political climate and the studies showing a need for acceptance for successful safety of LGBT people in public schools the implementation of anti-harassment policies and the incorporation of LGBT culture into public schools is more important than ever. Teachers are responsible for teaching all students, but they are also responsible for the safety and care of those students, advocacy for policy and support from the cisgender population has shown to be successful in all these respects.